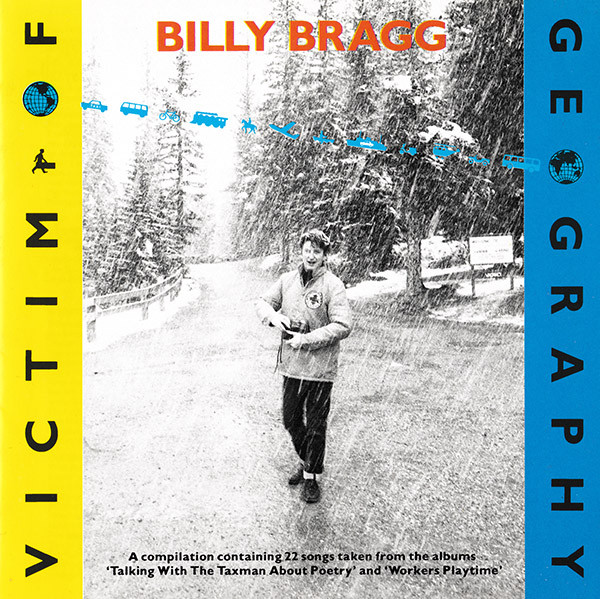 22nd November 1993
Double album compilation of 'Talking With The Taxman' and 'Workers Playtime'.
Cooking Vinyl COOK 061
Number of discs: 2
Listen on Spotify
Buy it from iTunes
Listen on apple music

Talking With The Taxman About Poetry

Greetings To The New Brunette

Shirley,
it’s quite exciting to be sleeping here in this new room
Shirley,
you’re my reason to get out of bed before noon
Shirley,
you know when we sat out on the fire escape talking
Shirley,
what did you say about running before we were walking

Shirley,
your sexual politics have left me all of a muddle
Shirley,
we are joined in the ideological cuddle

Shirley,
you really know how to make a young man angry
Shirley,
can we get through the night without mentioning family

Shirley,
give my greetings to the new brunette

I just don’t understand it
What makes our love a sin
How can it make that difference
If you and I are wearing that bloody, bloody ring

Outside the patient millions
Who put them into power
Expect a little more back for their taxes
Like school books, beds in hospitals
And peace in our bloody time
All they get is old men grinding axes
Who’ve built their private fortunes
On the things they can rely
The courts, the secret handshake
The Stock Exchange and the old school tie
For God and Queen and Country
All things they justify
Above the sound of ideologies clashing

CHORUS:
Now I can feed and wash and dress myself
And I can sleep without the light on
Honey, I’m a big boy now
I don’t know what she does With all the money that I sent her
She’s running round the town with the Young Pretender

Help Save The Youth Of America

When the lights go out in the rest of the World
What do our cousins say
They’re playing in the sun and having fun, fun, fun
Till Daddy takes the gun away

Don’t tell me the old, old story
Tell me the truth this time
Is the Man in the Mask or the Indian
An enemy or a friend of mine

Wishing The Days Away

The fear of a daughter can run high
In the mind of a father to be
For something is growing inside
But we don’t talk about it, do we

chorus:
And sometimes it takes a grown man a long time to learn
Just what it would take a child a night to learn

A long time ago she saw visions on the stairs
And when she felt dizzy her mother was always there
The home help is no help at all I have not committed a crime
Angels gaze down from the wall
Is there a God, Is there a next time

As Brother Barry said
As he married Marion
The wife has three great attributes
Intelligence, a Swiss army knife and charm
But that’s not enough sometimes
And she did speak her mind
And told them all that she believed
The only way to disarm is to disarm

Father mows the lawn and Mother peels the potatoes
Grandma lays the table alone
And adjusts a photograph of the unknown soldier
In this Holy of Holies, the Home
And from the TV an unwatched voice
Suggests the answer is to plant more trees
The scrawl on the wall says what about the workers
And the voice of the people says more salt please

Mother sees but does not read the peeling posters
And can’t believe that there’s a world to be won
But in the public schools and in the public houses
The Battle of Britain goes on
The constant promise of jam tomorrow
Is the New Breed’s litany and verse
If it takes another war to fill the churches of England
Then the world the meek inherit, what will it be worth

Mother fights the tears and Father, his sense of outrage
And attempts to justify the sacrifice
To pass their creed down to another generation
‘Anything for the quiet life’
In the Land of a Thousand Doses
Where nostalgia is the opium of the age
Our place in History is as
clock watchers, old timers, window shoppers

She's Got A New Spell

Must I Paint You A Picture

All your friends said come down
It will never fly
And on that imperfect day
We threw it all away
Crisis after crisis, with such intensity
This would never happen if we lived by the sea

What will you do when the war is over, tender comrade
When we lay down our weary guns
When we return home to our wives and families
And look into the eyes of our sons
What will you say of the bond we had, tender comrade
Will you say that we were brave
As the shells fell all around us
Or that we wept and cried for our mothers
And cursed our fathers
For forgetting that all men are brothers

Brothers in arms in each other arms
Was the only time that I was not afraid
What will you do when the war is over, tender comrade
When we cast off these khaki clothes
And go our separate ways
What will you say of the bond we had
Tender comrade

I stood before the Judge that day
As he refused me bail
And I knew that I would spend my time
Awaiting trial in jail
I said there is no justice
As they led me out of the door
And the Judge said, “This isn’t a court of justice, son
This is a court of law.”

They first sent me to Windsor
And then to Stoke on Trent
In a holding cell in Liverpool
Three days and nights I spent
My solicitor can’t find me
And my family don’t know
I keep telling them that I’m innocent
They just say, “Come on son, in you go.”

I was picked up on suspicion of something I haven’t done
Here I sit in ‘F’ wing waiting for my trial to come
It’s a cruel unusual punishment that society demands
Innocent till proven guilty, rotting on remand

They let me out of this cage
To slop that bucket out
To get my food and bring it back
And if I’m lucky, get a shower
Apart from one hour’s exercise
I’m locked in here all day
You don’t turn criminals into citizens
By treating them this way

Is the price of law and order the stench of Wormwood Scrubs
With judges quick to sentence more down from above
It’s a cruel unusual punishment that society demands
Innocent till proven guilty, rotting on reman

Valentine's Day Is Over

Poetry and flowers pretty words and threats
You’ve gone to the dogs again and I’m not placing bets
On you coming home tonight anything but blind
If you take me for granted then you must expect to find
Surprise, surprise

Life With The Lions