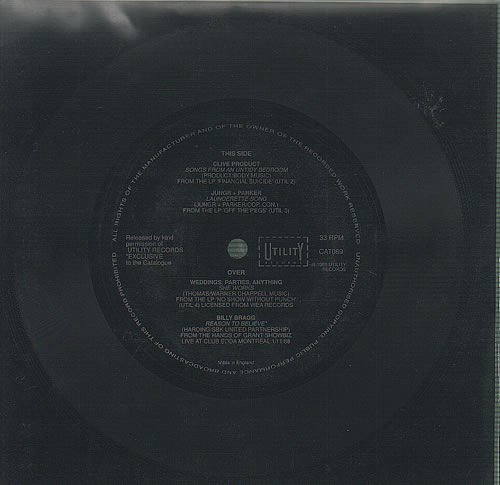 In ‘The Catalogue’ magazine plus ‘Songs From An Untidy Bedroom’ – Clive Product, ‘Launderette Song’ – Jungr & Parker and ‘She Works’ – Weddings Parties Anything

She Works - Weddings Parties Anything

She works, she works like a trojan
And she never says nothing, she doesn’t get sick
She never makes trouble, she’s a really good stick

All day, she works at the same job
Over and over like a cow in the field
A pig that’s in clover, a capital yield

And her fingers are feeling quite wretched
But she never says nothing, doesn’t complain
She’s alright in the morning, she does it again
She tells you she’s happy, she cries on the train

And her boss, he thinks he is Santa
He inquires politely, she says it’s alright
It’s hurting so badly but it wouldn’t be right
She can do one more carton
‘fore she says goodnight

Problems, she’s got great big problems
She says it’s arthritis to the power of ten
It’s been in her family since I don’t know when
She tells you it’s going but here it comes again

Oh and the union, she won’t join the union
She thinks she’s a martyr, takes it with a smile
The management knows but it’s not their style
You get used to being a cripple after a while