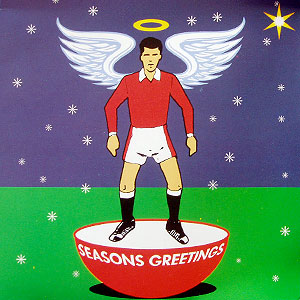 Promo CD for use at football grounds. In soft plastic sleeve often accompanied with a Christmas card from Billy.

Yesterday upon the stair I met a man who’s never there
He won’t be there again today
Well, that’s what he told me to say

He’s got the natural arrogance of an exclamation mark
And he wishes his bite was a big as his bark
He’s appealing to the referee at every single stage
He’s a fuzzy little bundle of impotent rage
And when he ought to have patience, he only has anger
In the game of life he’s just a dreadful goalhanger