Don’t Try This At Home 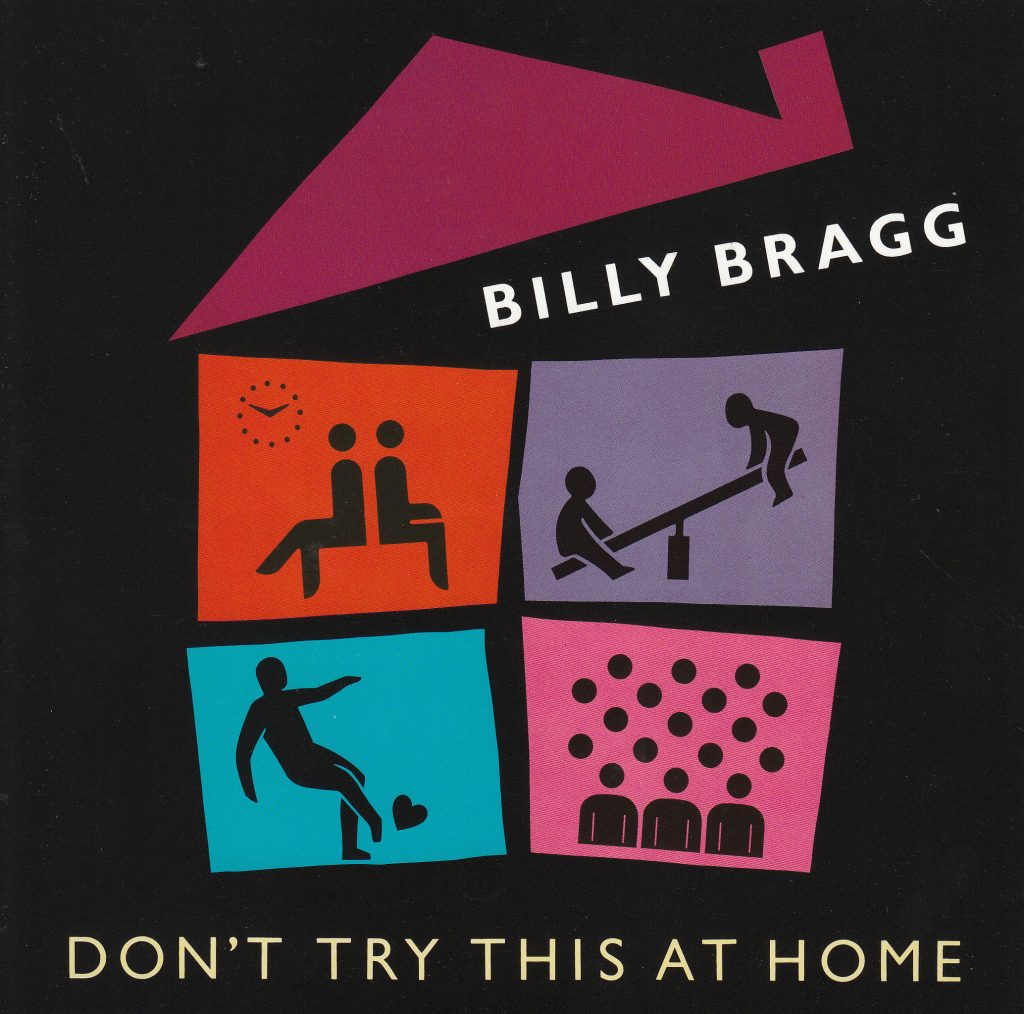 16th September 1991
Billy Bragg
Go! Discs 828-284-1
Number of discs: 1
Buy it from the store
Listen on Deezer
Listen on Google Play Music
Listen on Spotify
Buy it from iTunes
Listen on apple music

He’s been up all night
Moving the goalposts

Like a jackdaw with a fiery brand
Spread the news all over this land
Robin Hood and his Merry Men
Are never, never, never coming back again

Heavens above
Can this sticky stuff really be love!
Don’t get dressed yet
Not yet

We’ve been up all night
Moving the goalposts

Look at those slanted eyes coming up over the hill
Catching us by surprise, it’s time to kill or be killed

Over here, over there, it’s the same everywhere
A boy cries out for his mama before he dies for his home

All my life I wanted to be
As clever and strong as my best friend Lee
We grew up together along Half Moon Bay
Lee was Japanese, born in the USA

They said look at his slanted eyes, he’s guilty as guilty can be
Sent here as enemy spies to sabatage the Land of the Free

I never got home, my platoon was never saved
That little fox hole became my island grave
Lee got out of jail but a prisoner he remained
Till he ended his own life to lose that ball and chain

And they said Oh Little Slanted Eyes can’t you forgive and forget
And he said, Oh Mr Friendly Ghost
Can you catch water in a net?

You Woke Up My Neighbourhood

Will he stay by me and take my hand
And hold me till I sleep
Or will he crumble and fall to the floor
And weep
Oh feeble man, Oh evil man

He’s already been inside me
Would he have told me if he cared?
I know I ought to find out
But I’m much too scared

Will he hold me in his arms again
And wipe away my tears
Or has he already taken
My best years
Oh evil man, Oh feeble man

And the society that spawned them
Just cries out Who’s to blame?
And then wraps itself in the Union Jack
And just carries on the same
Oh look out, my country’s patriots are hunting down below
What do they know of England who only England know

Mother Of The Bride

The Reverend Mother went and got me a drink
She came back and said to me “Well what do you think?”
I said “I’ve made myself a fool
For the prettiest girl in school”

How can I deal with this hurt I feel inside?
I tell it to the mother of the bride

She married him and destroyed all my hopes
Of a two-up, two-down, two point five
and a dish on the roof
For the soaps
I saw them at the hardware store
He looked boring she looked bored

At the top of the stairs
Is darkness

You were so tall
How could you fall?

This world may never change

War! What is it good for
It’s good for business

I saw a man build a shelter in his garden today
And we stood there idly chatting
He said: “No, no I don’t think war will come”
Yet still he carried on digging

Wish You Were Her

That I wanted you to be my wife
Is the worst kept secret of my life
Everyone knows, even my friend here
I’ve just whispered your name in her ear
And this time
It’s gonna take a train to pull me through
Some brief distraction from your memory
Is all that I hoped that she might be
And as I ask her how she takes her tea
Wish you were her
Her
I wish you were her

Chorus:
I will cross this body of water
If you promise you won’t try this at home

You’re where you want to be
Where am I, I’m up a tree
I had a hurt attack
Rolled away, now I’m bouncing back

Summer could take a hint
Seeing you in a floral print
Oh, to become a pearl
In the wordy world of the Cornflake Girl